Tally Ho is a mobile video slot machine that brings players the best of British Humor, as it is themed around a family of British Foxes who enjoy the fancy and extravagant British lifestyle. So spin the reels and grab your share of their fortune 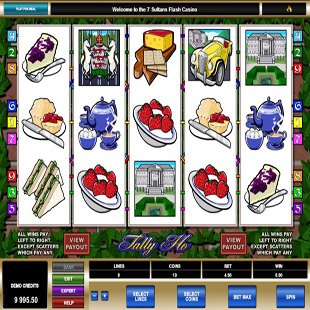 Tally Ho is a five reeled slot machine that brings players a unique and a fun British theme that is based around the extravagant and the fancy living of Britain’s Elite. The unique thing is that it is themed around a rich family of foxes, so get ready for an entertaining and a funny gaming experience that can also be quite rewarding. This is because as you spin the reels and accompany the rich foxes, you will get a chance to grab your share of their treasures and their fortunes through this 5-reeled and 9 paylined mobile slot machine. The game is not only accessible through computers as it is also a mobile slot machine that can be accessed through mobiles.

The Format of the Game

The game has a simple format as it has nine paylines and five reels. Despite the small number of lines, when compared to other video slots, the game can be quite rewarding as it has plenty of high paying line payouts as well as a set of rewarding features.

All of the icons that appear on the reels and lines are inspired by the theme of the game as they include a fancy mansion, a very expensive fancy sports car, a horse, cheese, a fox smoking a pipe, sandwiches, dessert, the insignia of the family, a race horse, tea cups, strawberry pie, a female fox in a purple dress and much more. They all come in wonderful graphics to provide players with a visually satisfying experience.

The scatter icon of the game is represented by the golden music instrument. This symbol is a game changer as it can reward players greatly through two different ways. The first one, being a scatter symbol means that it will reward players in scattered payouts. Second of all, it can trigger the free spins round in which players are eligible to claim ten free spins on the slot machine.

The Race Horse is the wild symbol of the game. It has the ability to substitute for any of the other symbols that appear on the reels of the game in order to form a winning combination of symbols on any of the activated paylines. The only symbol that it cant substitute for is the scatter symbol. On top of that, it will also double any payouts that it participates in creating for the lucky players.