Thunderstruck 2 for Mobile If you enjoyed playing Thunderstruck on your mobile an on your computer, then you are in for a surprise, this is because Microgaming has developed a sequel to the game, Thunderstruck II. The game offers advanced visuals and sound effects as well as a more rewarding gameplay. Of course, the game .. 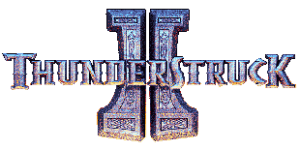 If you enjoyed playing Thunderstruck on your mobile an on your computer, then you are in for a surprise, this is because Microgaming has developed a sequel to the game, Thunderstruck II. The game offers advanced visuals and sound effects as well as a more rewarding gameplay. Of course, the game is also themed around the gods of the North, therefore, players will see many symbols that are inspired by that theme.

These symbols appear on the game’s 5 spinning reels and they include Thor, his mighty powerful hammer, Loki, Odin, Freya, the logo of the game, Valkryie and the homeland of the gods under the rainbow. This slot does not offer players a number of paylines as the game is not a paylines kind of game, it offers a more rewarding and a more exciting format as it has the 243 ways to win format. This way, players will not be restrained to a small number of lines anymore and they will have 243 different ways to achieve a win on the reels of the game.

The logo of the game, Thunderstruck II, is a wild card. This means that whenever this symbol lands anywhere on the reels, it will be able to substitute for any of the other symbols, except other bonus and special symbols, in order to aid players in forming a winning combo. That is not all, as any winning combos created with the help of the wild icon will have their payouts doubled.

Following the great success of Thunderstruck, Microgaming was very encouraged to make a sequel to the amazing game to offer players a more comprehensive experience as they rub shoulders with the gods of the Vikings. So get ready for a more thunderous and a more rewarding gaming experience with this 243 ways to win mobile/online slot machine, Thunderstruck II.